In California, contrary to popular belief, not all felony offenses are “strikes”. California categorizes strike offenses into two categories: serious felonies and violent felonies. A violent felony has a greater degree of aggravation often carrying a mandatory state prison sentence. Some examples of violent felonies include murder, mayhem, rape, and kidnapping.

A violent felony is alleged based on the underlying crime itself. For instance, murder allegations automatically carrying a strike allegation. Violent felonies are codified under Penal Code 664.7 and a conviction requires a defendant to serve 85% of their prison sentence, whereas a serious felony allows 50% credit.

A violent felony is applicable to California’s Three Strike laws where three convictions of a strike offense carry a mandatory 25 to life prison sentence. The rational is that the California legislature finds that these crimes merit special consideration when imposing a sentence to display societies condemnation for these extraordinary crimes of violence against the person.

For more information or if you or a loved one has been charged with a violent felony, contact an experienced Orange County Criminal Defense Attorney.

Can Police Search My Phone Without a Warrant?

The United States Supreme Court recently recognized the privacy interests concerning the contents of your cellular phone. With the advancement in technology, more people are…

When someone has been arrested or cited for a public offense, then the first court appearance will be their arraignment.  The arraignment is where a… 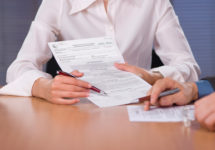 How to Obtain Your Formal California Criminal Record

Checking your criminal background should be conducted as much as checking your credit score. Those who view their credit report may discover fraudulent activity or…